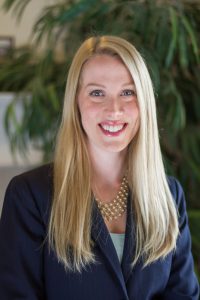 Jessica Czaya is an Associate Attorney at the Keith Taylor Law Group. Her field of practice primarily focuses on civil litigation, including personal injury and wrongful death cases, as well as litigation involving contracts, probate, and businesses.

Jessica attended the University of Florida where she obtained a B.A. in English with a minor in Education. After graduating from the University of Florida, she earned her J.D. from Stetson University College of Law. Jessica was admitted to the Florida Bar in 2012 and to the Maine Bar in 2019. She has worked with the Keith Taylor Law Group as an assistant and a Legal Clerk since 2004, and has been practicing as an attorney with the firm since October of 2012.

Jessica was also included in Citrus County Chronicle’s 40 under 40, recognizing young leaders in Citrus County, and selected as one of Super Lawyers’ Rising Stars four years running in 2016, 2017, 2018 and 2019.